774,830
population
12 percent
of the population lives below the poverty line
1/3
of primary school children are stunted

Bhutan’s small economy has grown rapidly in recent years, but it remains highly vulnerable. More than 12 percent of the population live below the national poverty line of US$ 28 per person per month, and a third of the population suffers from food insecurity.

Most of Bhutan’s poorest people live in remote rural areas, where children and young people are needed to work. If they cannot contribute, their family may face greater food insecurity. Bhutan’s mountainous Himalayan topography makes it difficult to build roads and other transport infrastructure, exacerbating food insecurity for families living in isolated rural areas.

Climate change worsens the risk, and is predicted to be a major problem as Himalayan melting threatens Bhutan’s drinking water and hydropower, a key export. Small-scale agriculture provides the main livelihood for the vast majority of the population, yet only about 8 percent of the country’s landmass is suitable for cultivating arable crops.

More than a third of children in Bhutan show signs of stunted growth caused by chronic malnutrition. Six percent of children are too thin for their height, a condition known as wasting, which is caused by acute malnutrition. The mortality rate for children under the age of five has significantly improved in recent years, but still sits at about 36 deaths per 1,000 children born.

WFP’s work in Bhutan aims to combat child malnutrition and, by encouraging school enrolment and attendance, to support the country’s development plan to reduce poverty. WFP is gradually handing over the school meals programme to the country’s Ministry of Education, helping the Government achieve self-reliance.

What the World Food Programme is doing in Bhutan

WFP supports the Government in providing school meals to over 25,000 children. This helps to combat malnutrition, reduce gender and economic inequality, and increase primary and secondary school enrolment – particularly for girls. A nutritious meal improves children’s health and allows them to concentrate on learning. It also helps reduce the financial burden on families, giving them an incentive to send their children to school. 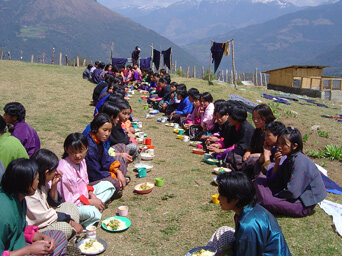 Achieving Zero Hunger is the work of many. Our work in Bhutan is made possible by the support and collaboration of our partners and donors, including: