28.5 million
population
41 percent
of children under 5 are stunted
25 percent
of people live on less than US$ 0.50 per day

The Federal Democratic Republic of Nepal is one of the world’s poorest countries, with alarmingly high malnutrition rates. Conflict ended in 2006, but its effects are still being felt through political turbulence and poverty. Twenty-five percent of Nepal’s population lives below the national poverty line on less than US$ 0.50 per day.

Around 41 percent of Nepalese children under 5 are stunted, while 29 percent are underweight and 11 percent suffer from wasting due to acute malnutrition. Micronutrient deficiencies are also widespread, and 48 percent of pregnant women are anaemic. Malnutrition slows economic growth, maintaining a cycle of poverty due to low productivity, poor cognitive function and increased health costs.

The World Food Programme (WFP) has been working in Nepal since 1963, supporting the Government to develop greater food security among vulnerable communities and build resilience to disasters. WFP’s work in Nepal primarily targets the most food insecure and those in the hard-to-reach districts of the Mid- and Far-Western Hills and Mountains.

Most recently, WFP delivered emergency food assistance and organized logistics in response to the devastating earthquakes that struck the country in April and May 2015. The earthquakes claimed nearly 9,000 lives and injured 22,500 people. They also caused an estimated US$ 7 billion of damage, pushing around 700,000 people into poverty.

What the World Food Programme is doing in Nepal

WFP’s Country Programme supports the Government of Nepal in building livelihoods for the country’s most vulnerable people, including providing seasonal employment and training to enable rehabilitation of rural roads, irrigation channels and other community assets. 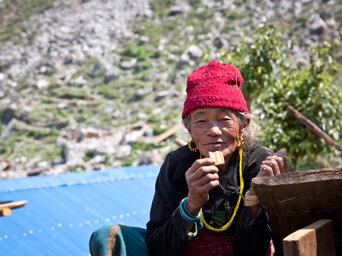 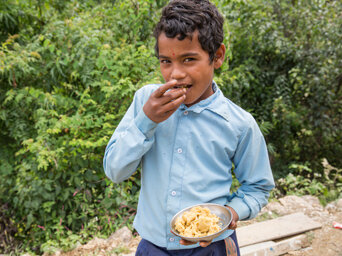 Following the devastating 2015 earthquakes, WFP is working on a three-year programme to help the Nepalese people to rebuild their livelihoods and food security. WFP is also working with the Government on the country’s long-term recovery, repairing infrastructure and building resilience to future disasters. WFP delivered emergency food assistance in the immediate aftermath, reaching two million earthquake-affected people. Food assistance to refugees in Nepal

WFP has been providing humanitarian assistance to refugees from Bhutan living in camps in Nepal for the past 23 years. They are all entirely dependent on external assistance to meet their daily needs, and in 2016 WFP provided food assistance to 15,000 refugees across two camps. 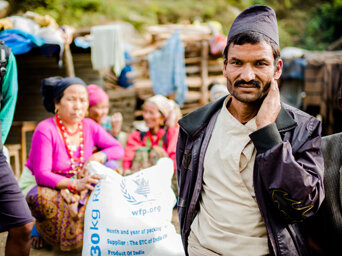 Achieving Zero Hunger is the work of many. Our work in Nepal is made possible by the support and collaboration of our partners and donors, including: