Rwanda is a low-income, food deficit country, and is one of the least developed countries. One of Africa’s highest population densities and a population growth rate of 2.6 percent each year contribute to the country’s food insecurity. Households headed by women or orphans make up 36 percent of the population.

Further strain on Rwanda’s limited resources is added by the presence of over 73,000 Congolese refugees, the vast majority of whom are housed in five camps, and over 84,000 Burundian refugees, more than 53,000 of whom live in Mahama camp and the remainder in urban communities.

Although rates of chronic malnutrition among children under five have improved in recent years, they are still high, at 37 percent – down from 43 percent in 2012. This affects the northern and western areas of the country the most, and 60 percent of children in these regions are stunted (have low height for their age).

WFP works in Rwanda as part of the United Nations ‘One UN’ agenda, implementing programmes – which are in line with Rwanda’s national planning processes and development programmes – in four key areas: agriculture and value chains, nutrition, social protection, and humanitarian response and disaster management. WFP works alongside Rwandan government institutions to improve food security among the country’s most vulnerable households, helping to ensure that people are well nourished and able to develop to their full potential. Activities help to meet immediate food needs, at the same time as providing technical expertise to strengthen Rwanda’s capacity to build its own food and nutrition security.

What the World Food Programme is doing in Rwanda

WFP supports the Rwandan Government to design and run its own programmes to improve food security, such as school feeding. WFP helps strengthen the government’s capacity to tackle issues such as chronic malnutrition and disasters. WFP also promotes gender equality, meeting differing gender food needs and encouraging women and girls to contribute to decision-making in a variety of contexts, such as refugee camp food management committees 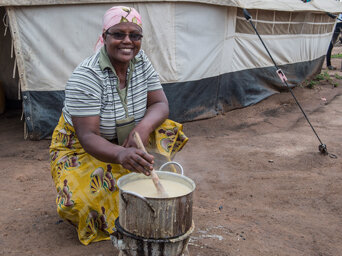 This project provides monthly in-kind or cash-based food assistance to registered refugees in camps and Rwandan returnees. Refugees living in camps have limited access to food, so they receive 100% of their food through this programme. The most vulnerable are also helped via other programmes, including school meals. Rwandan refugees returning home receive food assistance for the first three months. 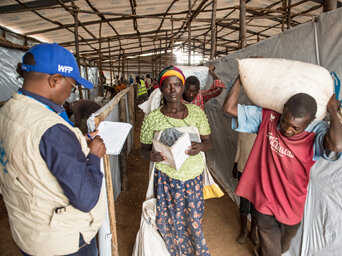 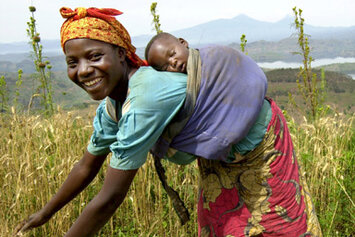 WFP works with the government to help it prepare for disasters through strengthening its capacity for activities such as vulnerability and hazard mapping. This enables the government to assess which areas are most at risk, potentially reducing the impact of disasters on people, property, critical infrastructure and economic activities. In partnership with the government, WFP provides nutritious meals for school children in the most food insecure areas via a home-grown school feeding programme. Food is sourced from local smallholder farmers, boosting rural economies. 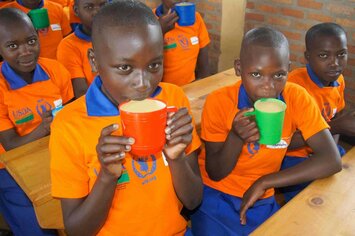 Ensuring farmers have something to harvest in Rwanda

Achieving Zero Hunger is the work of many. Our work in Rwanda is made possible by the support and collaboration of our partners and donors, including: